Working as an SAT/ACT tutor is a blessing and a curse: on the one hand, I get to help students improve their academic skills and college prospects every day; on the other, the grammar errors I’ve learned to expose and explain to students cannot be unlearned.

Last weekend, I was doing some yard work. To break the tedium of sweeping wet leaves off my deck, I turned on an episode of The Indicator, a quirky economics podcast that focuses on oddly specific but highly entertaining economic phenomena. This particular episode set out to answer a question about Fritos, the salty corn-based snack stocked in vending machines the country over. Why, the question went, was the price of the snack increasing when, according to the latest data, the price of corn––the main ingredient in Fritos––has been decreasing? No discussion could be more perfect for a whimsical, compelling distraction from the reality of soggy leaf piles.

But then something happened. One of the guests featured on the show said the following about the distributors of Fritos.

…so, presumably, the wholesale cost of the Fritos have gone up, and they’re passing those along to us…

For a brief second, I stopped sweeping and chuckled. Can you see the errors? If you read the snippet out loud, can you hear the grammatical missteps? If not, it could mean a 50-point swing on your SAT Reading and Writing & Language score, or a 3-point swing on your ACT English score.

I won’t leave you in suspense. Here’s the quotation again, now with the errors highlighted.

…so, presumably, the wholesale cost of the Fritos have gone up, and they’re passing those along to us…

What we’ve got here are two classic errors of subject-verb agreement, a concept commonly tested by the SAT Writing & Language and ACT English sections. Subject-verb agreement is the grammatical principal that prevents us from saying things like the dog jump on the chair or fiber optic cables transmits an unfathomable amount of data every second. The principle of subject-verb agreement means that in these examples, we’d have to say the dog jumps and fiber optic cables transmit, respectively. In other words, the thing doing the action (the subject) and the action (the verb) must be in forms that are consistent with one another.

The Fritos example, however, is trickier. Before reading on, ask yourself: what’s the subject of that quotation?

… [The Jeopardy! theme plays faintly in the background]…

It turns out that this sort of error is all over the SAT and ACT. But lucky for you, there are strategic ways of recognizing instances of subject-verb disagreement, even when they would otherwise go unnoticed.

For example, this is how a question testing this quotation in context might look on the SAT. 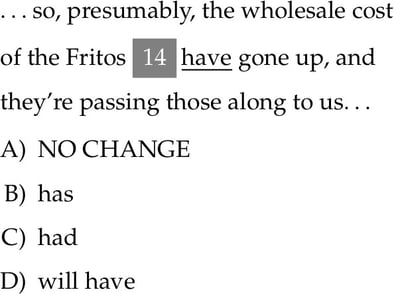 A second giveaway is the presence of a prepositional phrase. I’m no fan of jargon, but it’s important to know the seven most common prepositions on the SAT and ACT:

in
of
for
to
by
from
on

Any time these words show up in sentences that involve subject-verb agreement, they can be immensely helpful in isolating the proper subject. How? Let’s return to the quotation.

…so, presumably, the wholesale cost of the Fritos has gone up, and they’re passing it along to us…

Notice the subject wholesale cost shows up right before the preposition. Note also that the test writers attempt to trick us by putting the plural subject Fritos right before the verb. This makes the original have sound proper (i.e., the incorrect Fritos have instead of the correct Fritos has). Look out for these prepositions, and you’ll be able to more reliably locate the proper subject to use for your analysis.

All this might make me sound like an insufferable grammar scold. In reality, I neither expect nor promote perfect grammar in everyday conversation. I am just as guilty as the next person of making grammatical errors when I speak to others. However, it's a cold reality that students who notice grammatical slip-ups will fare much better on the SAT and ACT. Therefore, I encourage all students to question the grammar they read and hear––by doing so, they'll sharpen their eyes and ears, and increase their SAT and ACT scores. 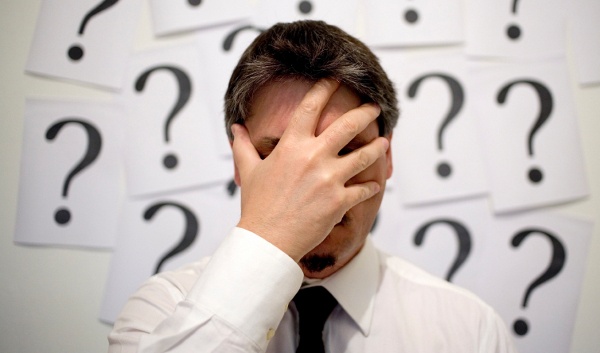 An Older Guy Takes the SAT

About four years ago, I took the SAT as a 35-year-old and wrote about my experience in an essay that ran in Newsday, the popular Long Island newspaper. So when the... 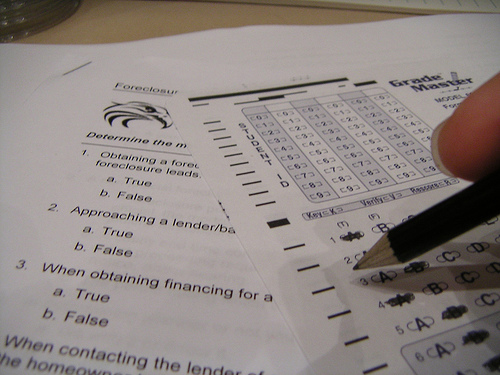 This past Saturday, I took the redesigned SAT. Click here for Part 1 of my reflections on the experience. In Part 2 below, I give a few thoughts about each section of...